With the Tour de France starting in Corsica tomorrow, cycling is our starting and ending point this week:

Although that picture includes four world-class riders, it wasn’t taken in France, or anywhere with a particular culture of cycling. It was actually taken during the UK National Road Race last Sunday, which took place in Glasgow.

The front chap, in blue, is David Millar – Scotland’s top road cyclist. Some of you may have heard of him because of his “colourful” past as an ex-doper. He was caught, banned and almost jailed for his part in the doping culture of early 2000s. But since then, he has done more than anyone else in cycling to make/keep it clean. He always been proud of his Scottish background but Sunday seemed to have a special significance for him. You could tell that not only from his performance (which was superb) but also from the tweets he posted after the race: 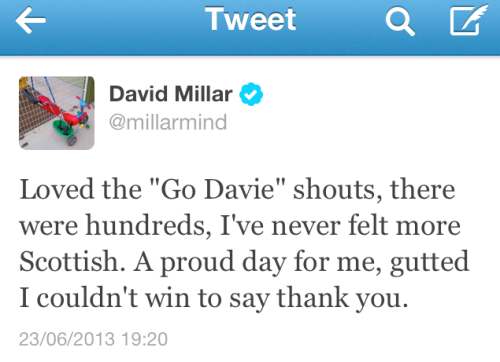 There are, as I see it, similarities between Millar and the city he was racing in: both have had a rough time and both looked like their best days were behind them. However, like Millar, Glasgow did itself proud on Sunday. The race itself was fantastic: it was well organised and well supported. But it also seems to have been good for other people too. For a start, it prompted the Council to fix the roads in the centre of town, which is a big deal for the drivers of Glasgow. Not only that, but the Council has carried on with the work and other roads are now being improved. It also got people excited about a sport which is growing in Scotland. I’ve heard stories of customers chatting about the race in shops, and if Instagram and Facebook are anything to go by, many folk who had no interest in cycling enjoyed it almost as much as the sad acts (like me) who watched it from beginning to end.

There are plenty of other things going on in the city at the moment too: the east end is more or less being re-developed for the Commonwealth Games; Strathclyde University is building what seems to be a new campus in the middle of town; and many of the huge tower blocks are being demolished to make way for more sociable social housing. If you look to the east of the country, the new forth crossing (have they picked a name for that yet?) is growing out of the depths at an impressive rate and on an impressive scale and if you look north Aberdeen seems to be booming.

We haven’t had a really positive message from TF for a few weeks now, primarily because there hasn’t seemed to be a lot to be positive about. However, that makes it all the sweeter when you look around and see things improving.

So, to the Tash. Unfortunately, Dave Millar appears to have never rocked a Tash. However, there’s a cyclist who will hopefully be on your screens for the next three weeks who does. I saw him riding in the Giro a few weeks ago and made a quick note of his name. Ladies and gents, this chap must be the happiest looking man ever to ride the Tour, Jose Perez: