For once, the subject of this week’s TF is not a Tash-toting festival of humanity (although, of course, such a person will be included) but is a topic that will impact many of us and generations of Scots to come. This week, I’m talking about the referendum which will ask whether Scotland should be an independent country

I must say from the outset that I will not be offering my view in relation to the referendum. My aim this morning is to offer a way for us to have civil and constructive conversations about our hopes and fears for Scotland in the future. It’s important that we have these discussions now because the way in which we talk about the referendum will shape how we talk about Scotland from 19 September onwards.

To start that process, I invite you to consider this Commitment to Respectful Dialogue.  Some of you may have seen this in The Herald and The Scotsman a couple of weeks ago, and many of you will recognise a few names amongst the signatories: 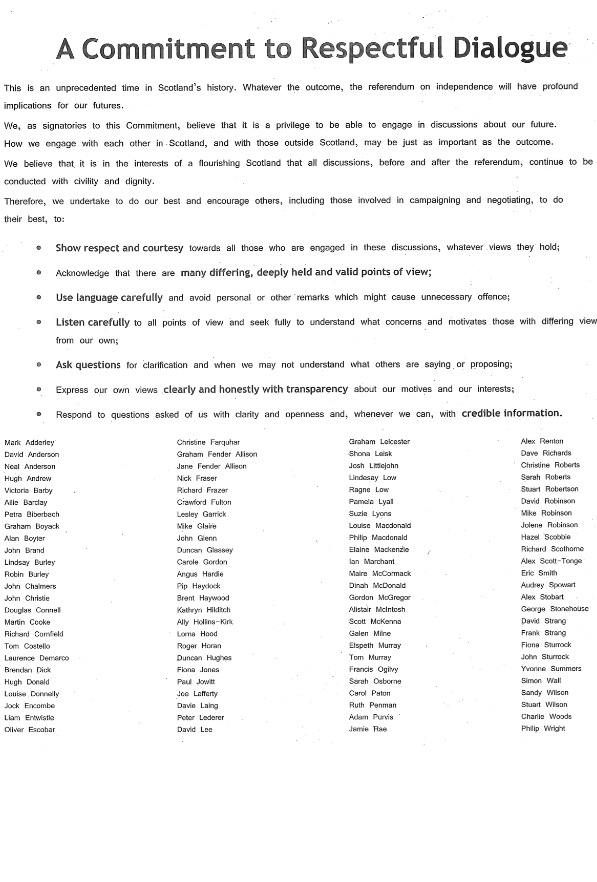 A group called Collaborative Scotland presented the Commitment following a series of meetings which took place over the last 6 months or so. The meetings, which were chaired by John Sturrock QC (an internationally recognised facilitator of constructive discussions and negotiations), gave those who attended the chance to test the theory behind the Commitment. The meetings were specifically not an opportunity to debate the referendum but were an opportunity to talk about how we have conversations about the future.

The magic of the process was that when the 50 of us sat down in groups to talk about our aspirations for Scotland, we discovered that the hopes and fears that we have in common are far more numerous than those that divide us. During our conversations, it was generally impossible to tell which way others would vote and, tellingly, that didn’t seem to matter.

So what does this have to do with you? Well, I know how many of you read TF every week and I suspect that many of you would find the conversations which I observed informative and inspiring. I also know that many of you are influential within your work/social circles and it strikes me that, together, we could spread the Commitment to a wider audience.

After all, on 18 September, we will be given the opportunity to shape Scotland’s path for centuries to come. We should take that opportunity to act as positively and constructively as we can. For my part, I’m planning to help host a conversation in Glasgow, and if there’s an appetite for it, I will invite all of you to come along.

I’ll therefore leave you with a link to the Collaboration Scotland website, where you can sign up to receive further information and offer your support to the Protocol; a request that anyone who might be interested in coming along for an evening of conversation in Glasgow sends me an email; and a quote from this week’s Tash, Mahatma Ghandi:

“We may have our private opinions but why should they be a bar to the meeting of hearts?”

It seems that every week that passes, this question becomes more important: what’s next?