On Tuesday of this week, the Scottish Parliament passed a Bill which will allow same sex couples to marry. The passing of the Bill means that Scotland is catching up with England and Wales, where same sex couples will be able to marry by the end of March.

The rights of gay communities around the world are in sharp focus at the moment, particularly as the Winter Olympics formally open in Sochi today. The homophobic laws and attitudes of some in Russia (particularly President Putin) have attracted a great deal of criticism.

Some say that politics has no place in sport and there is merit in that point of view. After all, athletes cannot control the laws of the places where they are sent to compete. However, it’s also true that sport is a leveller and can be a real-life example of many of the qualities of human nature.

We’ve seen in the past that sport can be an ideal opportunity to challenge inequality. Think of Jesse Owens in 1936 (when Owens confounded Nazi propaganda by winning gold in three sprint events and also in the long jump) and in 1968 when Tommie Smith and John Carlos raised a fist in the air for Black Power (they said at the time that it was for human rights in general and that is reflected in the human rights badges which they and the Australian athlete, Peter Norman, wore on their jackets):

Given the iconic pictures which resulted from Smith and Carlos’ stance on the podium, it can be no surprise who this week’s Tash will be. This is Tommie Smith these days:

It’s not just people on the big stage that can be a catalyst for change. We all can be. Indeed, if change is ever to happen and take root, it has to happen at a local level as well in full view of the public. To conclude this week, I thought it might be useful to give an example of an individual who took a stand in a more personal way. This is a letter which Bertrand Russell sent to Oswald Mosley, the founder of the British Union of Fascists, in 1962: 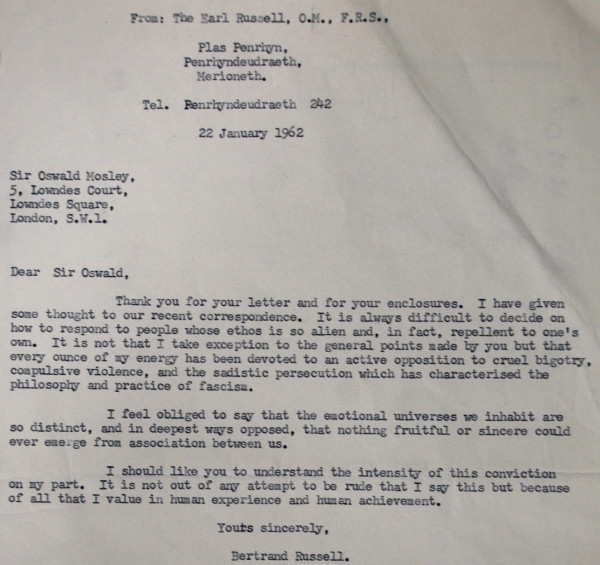 I really appreciate the terms of this letter: it’s polite, concise, yet emphatic. I would urge everyone who discusses issues like gay marriage, or anything where people have strong feelings, to take the same approach. It’s not often that one person is always right or always wrong and the chances are that the person you’re talking too has something interesting to say, even if you disagree with most of their views.