This morning, Scott Kelly woke up in the Baikonur Cosmodrome in Kazakhstan and won’t go to bed on Earth again for a whole year. That’s because Captain Kelly is going to spend a year on this:

The point of spending a year in space is to find out how the body changes in zero-gravity conditions over a long period of time. That’s going to be useful information to have before folk start heading off to Mars in the not too distant future. The guys at NASA are apparently concerned that long periods of time without gravity could lead to eyeballs changing shape; muscles (including the heart) weakening to the extent that they don’t function properly when back on Earth (or Mars); and bones losing minerals like calcium and weakening.

Of course, in any experiment about the effects of a particular type of situation on the human body it’s useful to have a control subject. Luckily for NASA, Captain Kelly has a twin brother – Mark. Mark Kelly was also an astronaut and you may recall that he’s married to Gabrielle Giffords, the former Congresswoman who survived an assassination attempt.

Mark Kelly isn’t just a control subject though – he’ll be key to his brother dealing with a whole year away from not just his home and family but his planet. As Elton John predicted: “it’s lonely out in space”. to Scott, the feeling of helplessness while he’s away with absolutely no way of getting home is likely to be the hardest part – he’s been in space for long periods before and he doesn’t seem all that concerned about the physical side of things.

Mark will be the person at the other end of the phone who’ll keep Scott’s spirits up and makes sure everything is OK at home. I guess it’s really true that no man is an island; even when he’s 229 miles above the Earth, going at 17,500 mph. 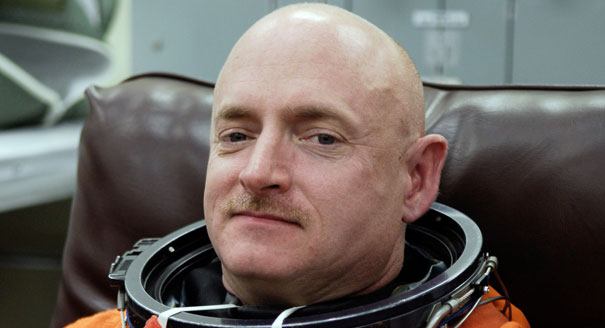 He’s grown his Tash out a bit since his days in space ended – no doubt that will be some comfort to his brother.